For the second installment of Forgotten Starlet, I very much wanted to do a post on Betty Field. When Betty Field appeared on the screen, she always stole my attention away from the other actors. Take for instance, when Betty Field played the character 'Mae' in the 1939 classic film "Of Mice and Men"(which was just her 2nd film!), which also starred Burgess Meredith and Lon Chaney Jr, Betty nearly stole the entire movie away from everyone else. She was dirty, conniving, just the way the character should have been. You hated her and when things didn't turn out, quite the way the character wanted it to be, you weren't disappointed. 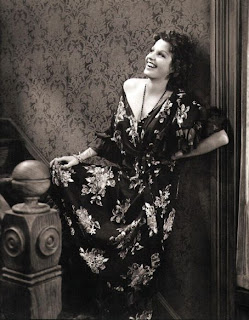 The sad thing was though, Betty was often known for roles like that. In "Blues in the Night"(1941), Betty again plays a dirty and conniving woman, who attempts to get her way but as typical, her way never wins out. Occasionally, Betty was given the chance to play a role that wasn't like the above mentioned characters, such as in "Kings Row"(1942), Betty plays a character that is terrified of what her Father could do to her, so in that you sympathize with her unlike those other films. 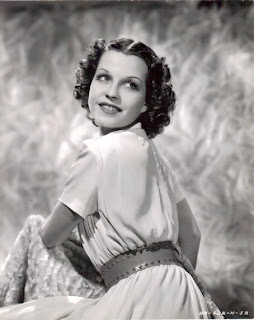 With Betty Field, you could get her to play any type of character. She was such a versatile actress but today her name is rather unknown to the public. Betty began her career in Hollywood in 1939 in the film "What a Life" in which she appeared alongside child star Jackie Cooper. Right after making that film, Betty went into "Of Mice and Men"(1939) portraying Mae and the film catapulted her career. She was a known name now and appeared in several hit films such as "Kings Row"(1942) and in a Preston Sturges' film "The Great Moment"(1944) with Joel McCrea as her leading man. During the 1940's, Betty appeared in more than 11 films including "The Southerner" with Zachary Scott (1945) and in "The Great Gatsby" with Alan Ladd (1949). Her film career was quite short but her performances in each film, was memorable and worth the watch if Betty was in it. Besides her film career, Betty also was on television appearing on such shows as "Robert Montgomery Presents" and "Lux Video Theatre".

Her career in movies basically vanished in the 1950's, with occasional appearances in movies like "Bus Stop"(1956), "Picnic"(1955), and in "Peyton Place"(1957). Betty was seen more and more on television and less on the big screen, but even on the small screen, Betty was simply amazing.


I know that I didn't mention Betty's personal life but I wanted to talk about her career in films and in television beforehand. Betty was born on February 8th 1913 in Boston, Massachusetts and while still a young child, her parents divorced, leaving her with a broken family. Her Mother did remarry and they resided in Newton, Massachusetts, where she grew up.


At a very young age, it seemed that Betty had gotten the acting bug appearing in small bits on Broadway and in summer stock. 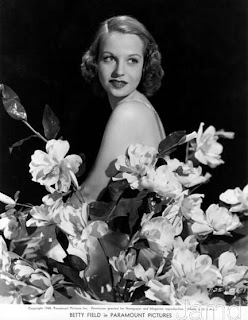 On September 13th 1973 in Hyannis, Massachusetts, Betty Field 60, died from a cerebral hemorrhage.


Betty didn't have many film credits to her name, but each film that she appeared in, she brought her A game to it. With every film, that I see of hers, I am constantly impressed with just how talented she was and it saddens me, that her career in movies was so short.


Next Up: Claire Trevor
Posted by Nicole Newcomb at 11:35 AM

Thank you for posting her upcoming schedule- I'm definitely going to watch her films now! I don't think I've actually seen any except Kings Row, and it's been years since I watched that.

I never forgot her! I love Betty Field. I was introduced to her in the later stage of her career with "Picnic". My favourite Betty picture is "The Shepherd of the Hills" 1941. Great cast including John Wayne, Harry Carey, Beulah Bondi, Marjorie Main, Ward Bond, John Qualen and the most beautiful cinematography. Try to check it out.
Lovely blog and photos. Thanks!

Lolita of the Classics said...

You just introduced me to a new actress! Great post, I can't wait to see Of Mice and Men.

I think I remember her best from King's Row, Coogan's Bluff, and the various guest appearances she made on television. She was certainly a versatile actress--she could play anything from femme fatales to ordinary women!

Though I adored Betty in The Southerner, I didn't realize she was also in Blues in the Night! What a difference between those two characters. It just goes to show what an amazing actress she was. I love your forgotten actors series :-)

Though I have only watched Of Mice and Men, I have to admit, though not shamefully, that Betty was indeed a wonderful actress who stole our attention whenever she appeared before us. She was full of talent and was so beautiful as well.

She may not have been all that well known but she won't ever be forgotten with me.

She was in Picnic??? I should check that out again!

But I'm definitely going to check out The Great Gatsby now.

Many years ago I bought a box of paper dolls at a garage sale...all were famous movie stars of the 30's-40's. It wasn't until just recently that I discovered that one of the paper dolls was in fact Betty Field, era 1942! Love your blog!

What brought me here was that my DVR just captured The Southerner, and I thought Betty Field to be stunning.

Watching Kings Row on TCM and googled to find Betty Field info, saw your site and JOINED. Enjoyed your blog on Field! Thanks!

I truly appreciate this tribute to Miss Field. I am watching "Peyton Place" on RETRO TV rite now and am fascinated by her. Whatever I see her in, I love. She was such a great talent!!! Quite lovely in her youth too.

You know, I haven't forgotten her, or her bright young face back when she played all those innocent young women in films like Shepherd of the Hills, and King's Row. She was lovely, and a good actress, but like all mortals time destroyed her freshness, and she was reduced later in her career to playing slatternly maids, or plain old women, or ladies of the evening. But through it all, she was a fine actress, with a distinctive cadence to her voice, that I liked very much,

Blues in the Night she was great. Played a gal named Kay. First time I saw her and had to find out more about her. Great actress.

Just watched her Shepherd of the Hills. She was superb.